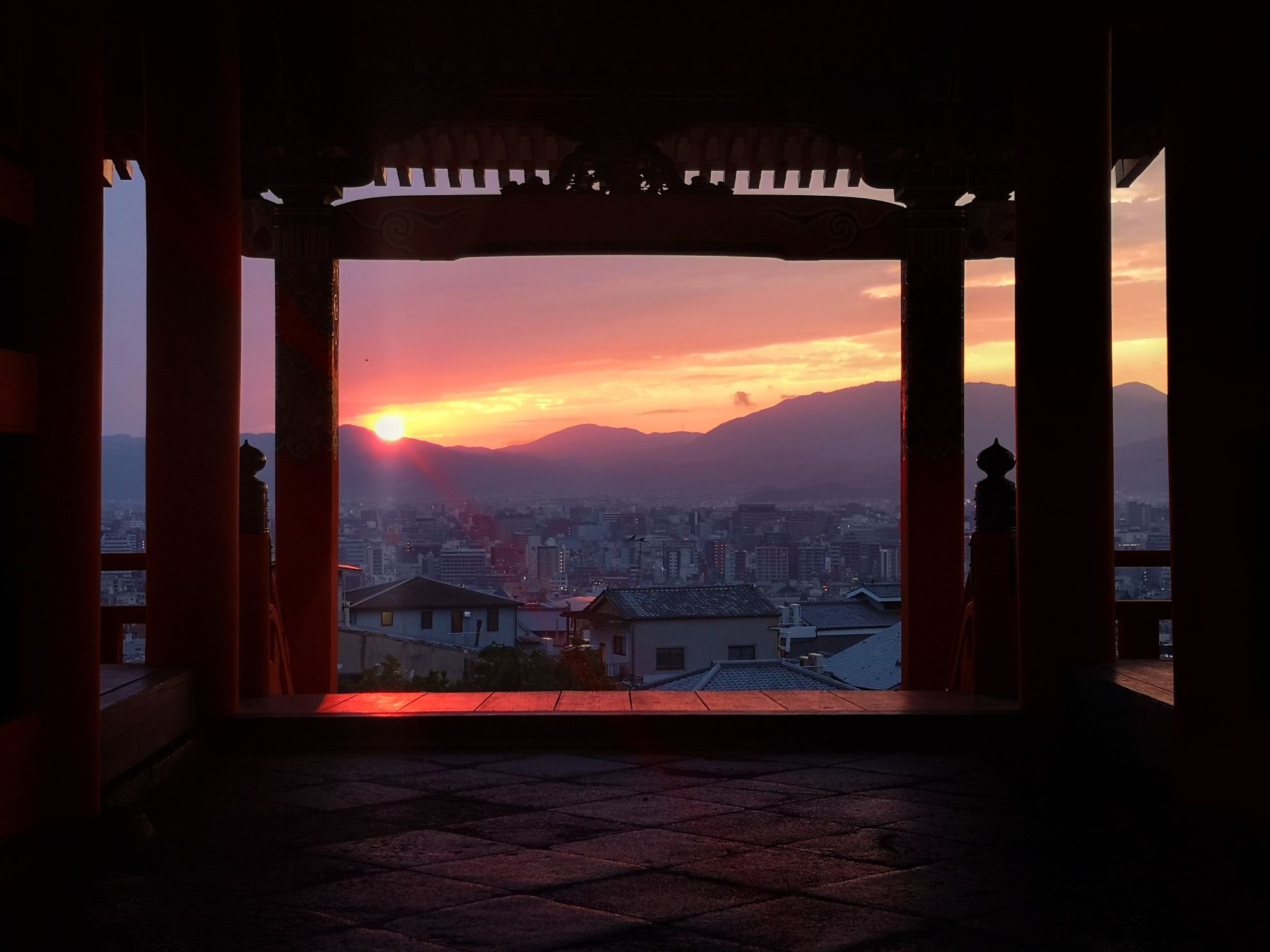 This post will cover the Higashi-Yama area South from the Gion district and east of the Kamo River.

This temple in tribute to the unknown soldiers fallen in World War I features among others a memorial hall dedicated to foreign fallen soldiers, a big bronze ball which provides luck if you circle around it 2 times and a shrine in memorial to the fallen japanese soldiers. The most eye catching structure though is that of the  24 meter tall sitting Kannon statue – the goddess of mercy in memoration of all the fallen japanases soldiers and for the establishment of a peaceful Japan. THe entrance fee was 300 Yen.

The Kiyomizu Dera temple area awaits  you at the end of the road after walking through the medium steep streets of Kiyomizu. Since it is located on a Hill at the east side you can catch a superb view over the sunset if you face to the west side. The terrace of the temple facing to the south are supported by 13 m tall wooden pillars which makes this temple so unique. Unfortunately the main temple was under construction in 2019 and mostly covered.

Gion is a famous Geisha district in Kyoto. It is said, that if you are lucky enough you can see a dressed up Geisha on her way to work. The main street houses more touristic related shops while you can will discover expensive traditional teahouses in the back streets. You can see the Yasaka Shrine at the eastern end of the main road.

The Kiyomizu in Higashiyama, ultiamtely leading to the Kiyomizu-Dera, seems like the aquivalent of the Asakusa district in Tokyo. Especially here you can see a lot of old buildings and a lot of girls a dressed in Kimonos. The streets mostly of coffee and souvenir shops. There is one hidden Starbucks coffee shop within all those old buildings which you would miss if you don’t know of it’s existence. This particular Starbucks actually has a more tradional oldish interior furnishing.

This temple is 120 meters long and has pillars every thirty-three spaces thus the name of Sanjusangen-do – a hall with thirts-three spaces between columns. This hall features 1001 Kannon statues: 1000 smaller standing and one big sitting statue in the center. The statues were built in the 12th and 13th century. Outside you can get a look at some greenery and a wide long pebbled path. This area has in fact been used for another purpose – archery. The Toshiya event was a famous archery event with 4 different disciplines having to shoot from one end to the otehr end of the temple. One of those disciplines was to shoot as many arrows as possible within 24 hours. Wasa Daichiro shot 13053 arrows from which 8133 actually hit the target. This also meant, that he shot on average 9 arrows per minute.

The Fushimi Inari is the head shrine of the more than 30000 Inari shrines found across Japan. Since the backstory as well the hike is quite interesting and i took a lot of photo material a dedicated post can be found here.