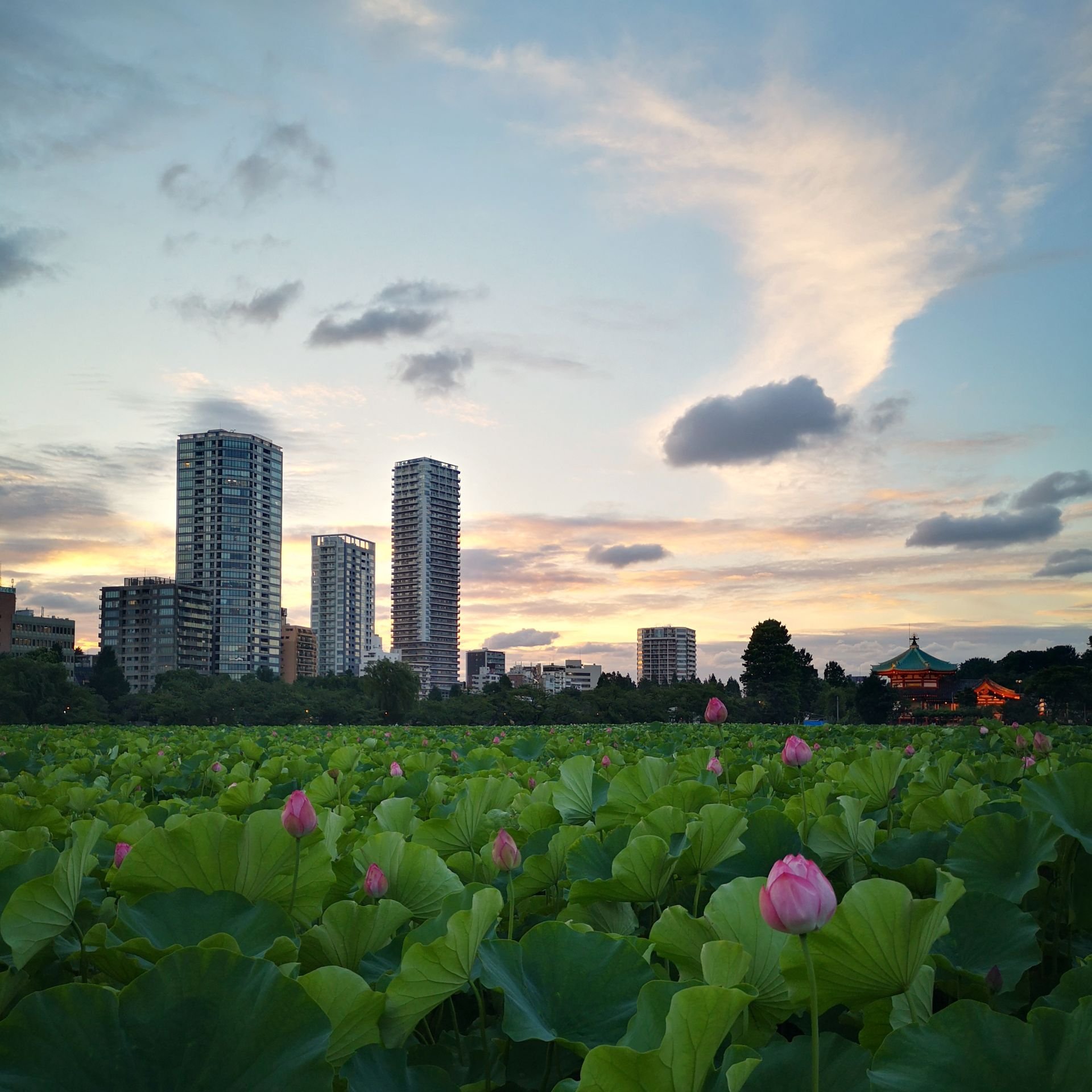 Ueno is a district in the Taito ward and the area where i used to live during my exchange semester. Since it has one of the most important train stations, a small shopping area, an extensive park with a pond and a Don Quixote and Yodobashi you could just stay in this area without the need to go to any other district.

Taking a look at google maps let’s me believe that the Shinobazu pond is the only bigger freely and easily accessible pond in Tokyo. In the evening it has a beautiful calm vibe to it. There is a small building where smaller concerts are held every some fridays and a temple is located on a man made island in the middle of the pond. On the northern side there are some sort of equipment provided for body weight exercises and it is in general a good place to take a walk or to go jogging. Cherry trees surround the pond and thus the pond looks even more amazing durirng Sakura season.

The Ueno station offers access to a lot of important train lines such as the Shinkansen or the Yamanote line which is a circular line throughout Tokyo. There are several retail stores located such as Yodobashi and Loft near the station as well as some Karaoke bars.

Ueno Market is probably not the official name but let’s just call it that way. There are some shopping like streets right near the Ueno station. The streets reminds me a bit of Vietnamese markets where you have a narrow alley with shops left and right. People are shouting and advertising their products such as fresh seafood, cloths or snacks. More bars and restaurants are located further down south east.

The Ueno Park is quite big and consists of a main wide road surrounded by Sakura trees and leading to the National Museum.

Within the Park are again some distinctive sights worth mentioning:

A shrine built in 1627 dedicated to the first emperor who united Japan – Tokugawa Ieyasu. Beyond a certain point there is an admission fee of 500 Yen. There is an interesting monument in the shrine area which you can easily overlook if you don’t pay enough attention. It is called the flame of Hiroshima and Nagasaki. A greatly summarized version of the story goes like this: Tatsuo Yamamoto while in search after his uncle in Hiroshima, found a flame of the atomic bomb still burining in the ruins and decided to bring it back to his hometown as a memento and an expression of resentment. The meaning of the flame changed throughout the years and it became a symbol of abolishing nuclear weapons for peace. The flame has been merged with another flame found in Nagasaki and is now kept burning at this shrine to remind people of the danger of nuclear weapons and the need to abolish them.

The national museum is located on the northern side of Ueno park and harbors cultural artifacts and paintings/prints of Japan’s history. The exposition of the regular ticket is quite extensive spanning over 2 buildings so if you want to give it a visit you should plan for at least half a day .

Ueno park was formerly a temple complex however when the Tokugawa reign ended it was opened up as the first public park in Tokyo. Today there is only the Kiyomizu Kanon Do left (which is supposed to be a copy of the Kiyomizu dera in Kyoto ). It enshrines Kosodate Kanon a protectress of child bearing and child raising which is probably why it is especially popular among woman hoping to conceive. It is said to be one of the oldest survivng temples in Tokyo (source: old-tokyo.info, uncover.travel, accessed: 06.10.219).

“this Inari shrine—a shrine dedicated to Inari, the androgynous god of fertility and worldly success—is a favorite place for businessmen to pray for successful ventures.” – wikipedia, accessed 06.10.2019