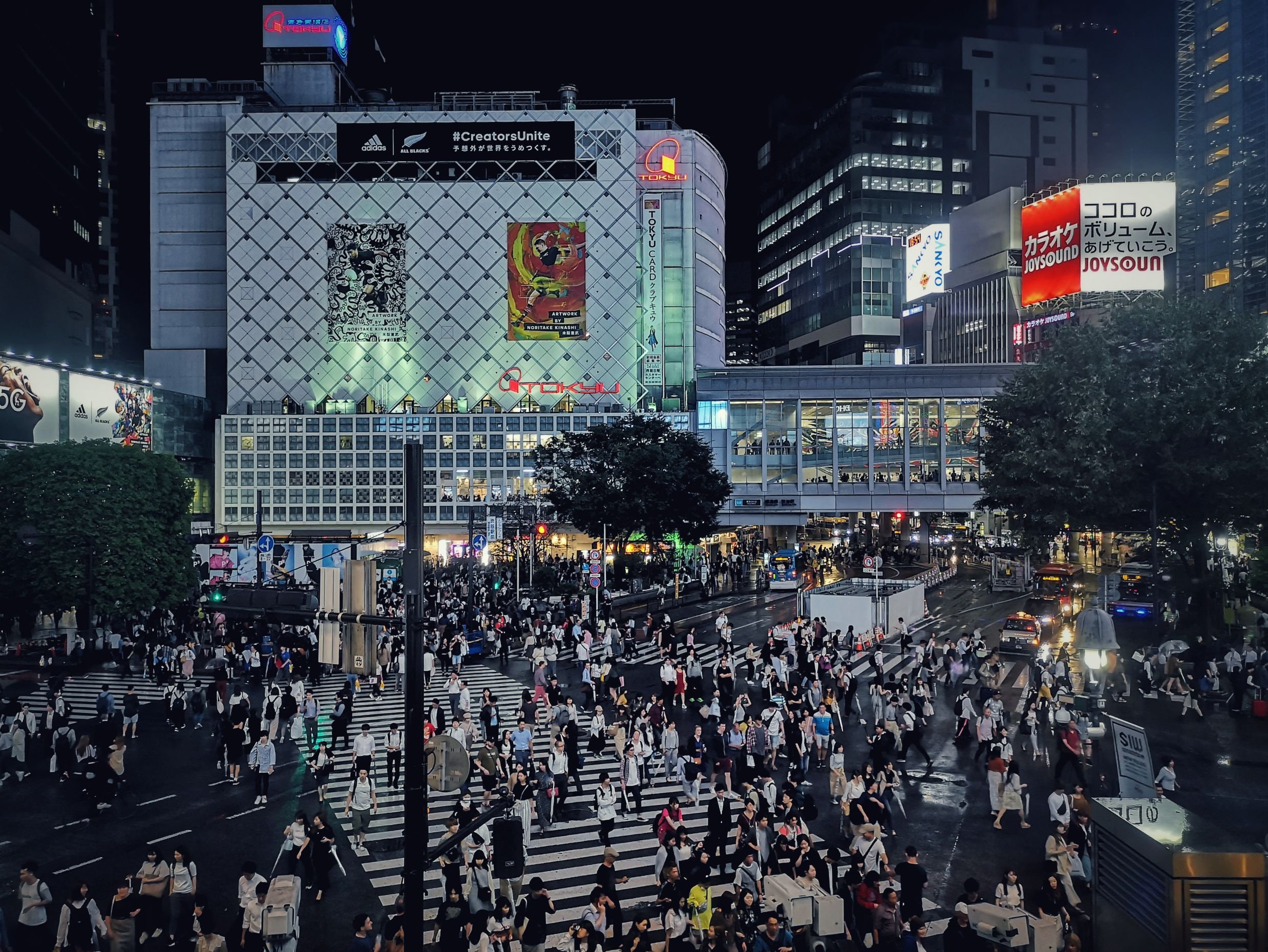 Shibuya is probably one of the more famous wards in Tokyo. Hearing that name, one of the world’s most busy crossroads and streets filled with blinking advertisements and clothing brands come to one’s mind. However additional to that busy shopping part, there is also this big busy greenery park offering ahuge space for recreational activities.

The infamous Shibuya crossing is located right after the Hachiko exit of Shibuya Station. There seem to be a lot of possible ways, but if you just want to get a quick shot of the crossing you can go to the Starbucks coffee shop. Unsurprisingly, this coffee shop is said to have the highest crossing revenue. You can get to the 2nd floor which has a panorama window with seats for customers only but will also work out if you blantly squeeze in there to take some photos. The building in which the Starbucks resides however has a lot more to offer and mainly sells music cds. Also on the top floor is a rather luxurious but small cafe.

The dog statue shown in the picture below is of the dog Hachiko, who is rembered as a remarkablly loyal companion. Ever day Hachiko would accompany his owner to the nearby Shibuya Station as well as greet him from his way back home. Unfortunately his master died while at work, however this didn’t stop Hachiko from waiting. He would come every day at the exact time to wait for his owner for the next 10 years until he died 1. Nowadays there are some series which reference Hachikos life, one of them is in the series Futurama 2.

The shopping area is just next to the Shibuya crossing in front of the Shibuya station. This area is filled with both blinking banners and the people who the banners try to pursuade. The streets are rather narrow and not in a grid but don’t really follow a pattern. You can find a lot food stalls in between the shopping stores and unlike Ginza or Omotesando the stores offer fabrics in the middle prize range.

Going further to the north we will encounter a large park area. The Yoyogi park is freely accessible and even at night quite busy. In summer 2019 every weekend a different country themed food festival took place at the west side.

Omotesando is a brand driven luxurious shopping street opposite to Harajuku station. The people definetely dress differently than people in Ginza and the buildings are more uniquely shaped. The Tokyu Plaza at the end of the street has a fascinating entrance with a wierdly shaped glass wall.

This street is not too far away from Harajuku station. It is a narrow street with a lot of exotic shops. The street is not too long but it takes time to walk through the crowds. At the end of the street if you turn left you will see a rather hidden entrance to a hotel which provides a small pond and park area. While the street you just exited 2 minutes ago was loud and busy this area is contrary verey calm and you can almost hear nothing from the busy outside.

There are different entrances to the Meiji Shrine area one is at the Harajuku station on the right side. The Tori gate welcoming both tourists and locals is said to be the biggest wooden Tori gate in Japan (tabiscrap.com, accessed 13.10.2019). Following the Edo era came the Meiji era. Emperor Meiji encouraged various industries and supported technological development leading to industrial growth and modernization in Japan. In his honor his soul has been enshrined here. To pay respect several sake breweries donated their sake which are displayed a couple meters right after the entrance (source: information board). In front of the shrine on the left side you can see two trees tied to each other by ropes. Those are in fact sacred and called “couple camphor tree”. Bound by one another it is said they bring good luck in relationships.