It just so happened, that two of my friends were going to live for an overlapping time frame abroad in Italy. So using this opportunity of an exclusive translator and guide i went “out of my way” to visit them both.

My first mistake was to be not enough prepared for this vacation. I just had to power knit my scarf until 4 am and catching my bus from Dresden to Berlin at 7 am was no easy task. I arrived at the city of Bologna were I met with my friend “E”. After unloading my backpack we headed to coffee and the first sightseeing spot – little Venice. There exists 7 secrets in Bologna and this little window displaying a hidden view to the canal is one of them. 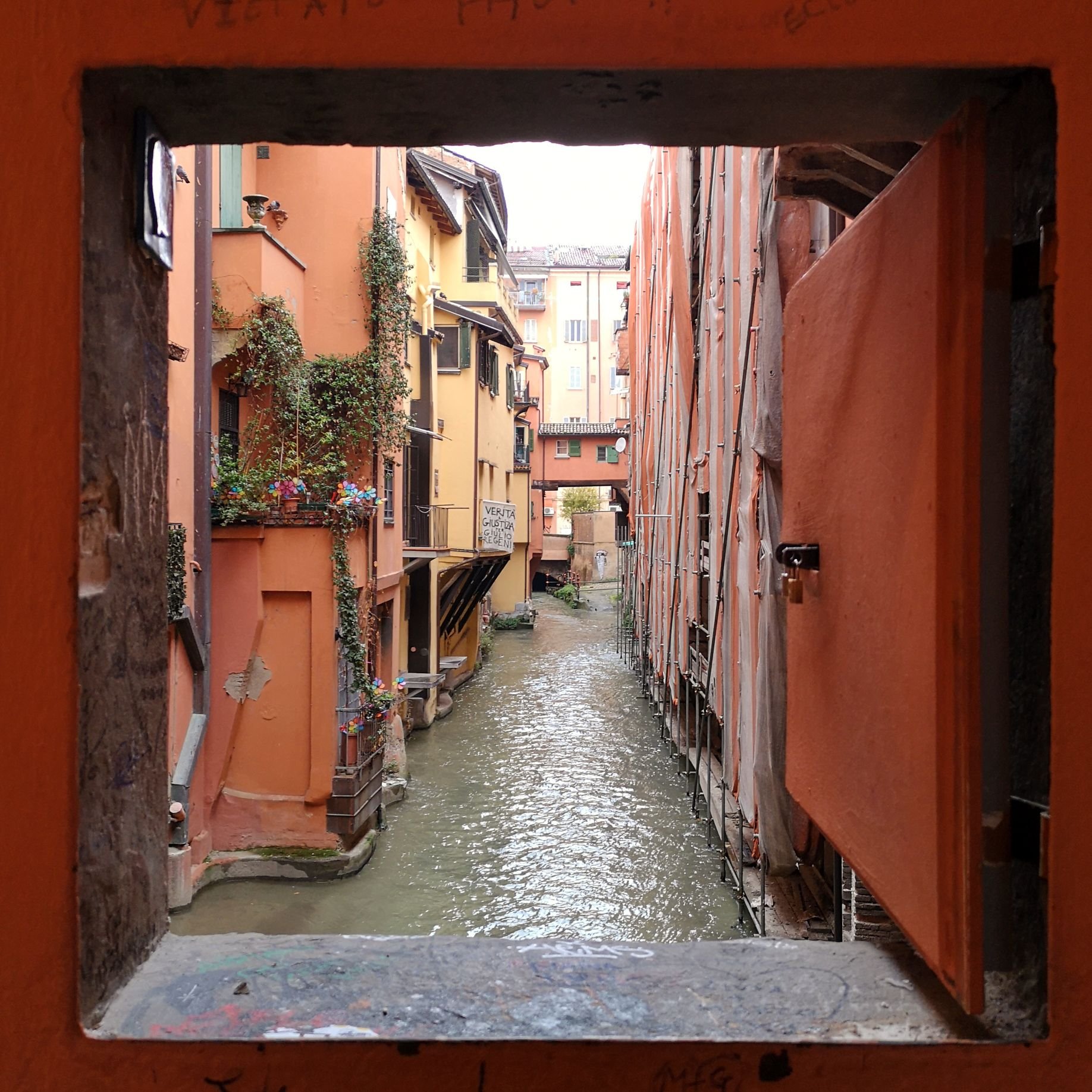 At 4 pm we started hiking to San Luca trying to catch the sunset at 4:45pm. Although google maps would suggest a duration of 30 minutes of walking time in retrospective this was way too late to start the hike and i am very thankful for having a friend who kept up with the fast pace without complaining. Unsurprisingly when we reached the top it was already dark and a thick layer of fog obstructed a view of Bologna. Nonetheless we were as happy as hot when we arrived at the church.

In the evening while having dinner i learned a new fun fact. The Spaghetti Bolognese as we all know it has its origin from Bologna and is actually called Tagliatella al Ragu. However since this is very hard to remember it seems that people just shortened it to Bolognese as in the people of Bologna.

Bologna has 3 nicknames. The fat – because of all its delicious food. The red – because of all its red rooftops. And the learned – because its University founded in 1088 is (one of ?) the oldest universities in the world. A high percentage of residents are students and as i’ve been told there are also a lot of exchange students, so called Erasmus students, among them.  It seems that some local residents don’t really like having so many foreign students coming and going to the city, because they misbehave and cause an increase of rent prices.

After staying in the bar Le Stanze we were off to Piazza Maggiore to discover the next 3 secrets. The first one being a hidden message on a ceiling reading Canabis Protecto. The next one is under the Palazzo Re Enzo building. If you stand in opposite corners facing the wall at the cross section and talk towards the corner of the wall you could actually hear each other. My friend explained, that this kind of mechanism has been used  by doctors among others to speak with each other in medieval times when the black plague was going around. The last fun secret is about the Fountain of Neptune which is facing towards the Basilica di San Petronio. Originally the sculptor intended a more extended variant of Neptune’s male reproductive organ. However because it was facing the church, the church made him chop off Neptune’s limb. Furious about that, he seeked revenge. By building the sculpture in a particular way and looking at the sculpture from a particular point of view, Neptune’s finger can perceived as his male reproductive organ pointing towards the church.

Being totally worn out we then proceeded to call it a day.

I had to catch my train to florence the following morning at 10 am but not before i could take a good shot of the leaning towers of Bologna. The smaller and noticeable more leaning one is the  Garisenda tower whereas the taller tower is called Asinelli. You can actually climb up the latter however it shall bring misfortune to students who have not graduated yet.

On my way back to the central station i passed through the Basilica di San Petronio once again. The facade is actually in its original state meaning it has only been halfway finished and left like that for centuries. One of the perks of being up early is that you can enjoy the place without too many tourists around.

There was some trouble finding the right platform. Apparently there are two different companies with separate customer service stationed at the central station and the one from the other company did refuse to give me any info on my ticket and referred me to  another customer service lady who was fully queued. But eventually i found my platform to go to Florence transferring at Prato.